The Mobile Generation: Global Transformations at the Cellular Level

Every year we see a new dimension of the ongoing Digital Revolution, which is enabling an abundance of information to move faster, cheaper, in more intelligible forms, in more directions, and across borders of every kind. The exciting new dimension on which the Aspen Institute focused its 2006 Roundtable on Information Technology was mobility, which is making the Digital Revolution ubiquitous. As of this writing, there are over two billion wireless subscribers worldwide and that number is growing rapidly. People are constantly innovating in the use of mobile technologies to allow them to be more interconnected. Almost a half century ago, Ralph Lee Smith conjured up "The Wired Nation," foretelling a world of interactive communication to and from the home that seems commonplace in developed countries today. Now we have a "Wireless World" of communications potentially connecting two billion people to each other with interactive personal communications devices. Widespead adoption of wireless handsets, the increasing use of wireless internet, and the new, on-the-go content that characterizes the new generation of users are changing behaviors in social, political and economic spheres. The devices are easy to use, pervasive and personal. The affordable cell phone has the potential to break down the barriers of poverty and accessibility previously posed by other communications devices. An entire generation that is dependant on ubiquitous mobile technologies is changing the way it works, plays and thinks. Businesses, governments, educational institutions, religious and other organizations in turn are adapting to reach out to this mobile generation via wireless technologies -- from SMS-enabled vending machines in Finland to tech-savvy priests in India willing to conduct prayers transmitted via cell phones. Cellular devices are providing developing economies with opportunities unlike any others previously available. By opening the lines of communication, previously disenfranchised groups can have access to information relating to markets, economic opportunities, jobs, and weather to name just a few. When poor village farmers from Bangladesh can auction their crops on a craigslist-type service over the mobile phone, or government officials gain instantaneous information on contagious diseases via text message, the miracles of mobile connectivity move us from luxury to necessity. And we are only in the early stages of what the mobile electronic communications will mean for mankind. We are now "The Mobile Generation." Aspen Institute Roundtable on Information Technology. To explore the implications of these phenomena, the Aspen Institute Communications and Society Program convened 27 leaders from business, academia, government and the non-profit sector to engage in three days of dialogue on related topics. Some are experts in information and communications technologies, others are leaders in the broader society affected by these innovations. Together, they examined the profound changes ahead as a result of the convergence of wireless technologies and the Internet. In the following report of the Roundtable meeting held August 1-4, 2006, J. D. Lasica, author of Darknet and co-founder of Ourmedia.org, deftly sets up, contextualizes, and captures the dialogue on the impact of the new mobility on economic models for businesses and governments, social services, economic development, and personal identity. 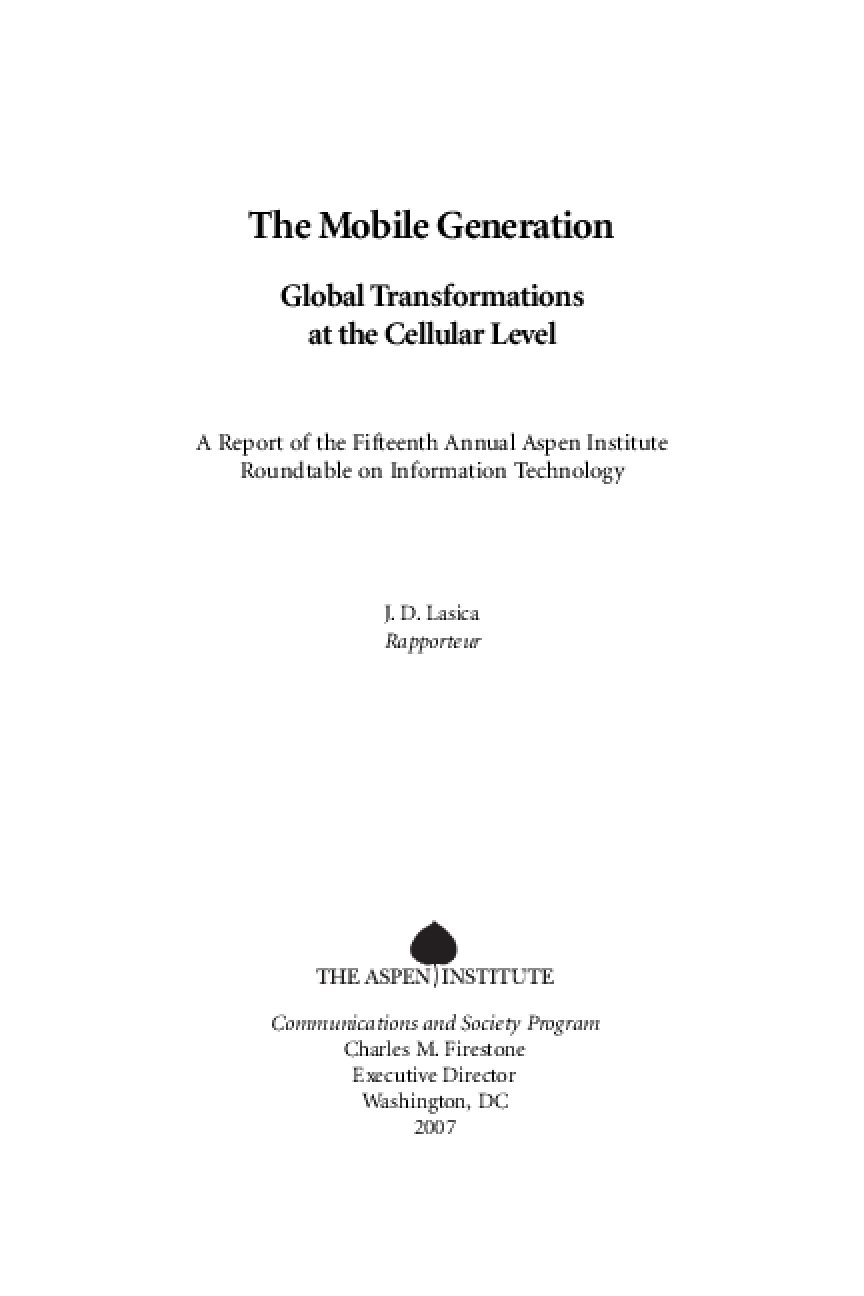 What to read next