The Psychological Needs of U.S. Military Service Members and Their Families: A Preliminary Report

Since September 11, 2001, American military service personnel and their families have endured challenges and stressful conditions that are unprecedented in recent history, including unrelenting operational demands and recurring deployments in combat zones. In response to concerns raised by members of the military community, the American Psychological Association (APA) President, Dr. Gerald Koocher, established the Task Force on Military Deployment Services for Youth, Families and Service Members in July of 2006. This Task Force was charged with: identifying the psychological risks and mental health-related service needs of military members and their families during and after deployment(s); developing a strategic plan for working with the military and other organizations to meet those needs; and constructing a list of current APA resources available for military members and families, as well as additional resources that APA might develop or facilitate in order to meet the needs of this population. At present, 700,000 children in America have at least one parent deployed. Having a primary caretaker deployed to a war zone for an indeterminate period is among the more stressful events a child can experience. Adults in the midst of their own distress are often anxious and uncertain about how to respond to their children's emotional needs. The strain of separation can weigh heavily on both the deployed parent and the caretakers left behind. Further, reintegration of an absent parent back into the family often leads to complicated emotions for everyone involved. This Task Force was established to examine such potential risks to the psychological well-being of service members and their families, acknowledging the changing context and impact of the deployment cycle, and to make preliminary recommendations for change and further review at the provider, practice, program, and policy levels. To meet the Task Force charge, we will first provide an overview of what is currently known about the impact of military deployments on service members and their families (spouses, children and significant others). In addition, we will discuss a number of programs that have been developed to meet the mental health needs of service members and their families, and we will describe the significant barriers to receiving mental health care within the Department of Defense (DoD) and Veterans Affairs (VA) system. Finally, we will offer several general recommendations for improving the psychological care offered to service members and their Military Deployment Services TF Report 5 families, and we will outline some specific proposals for how existing APA programs and resources can be employed or modified to support military communities. 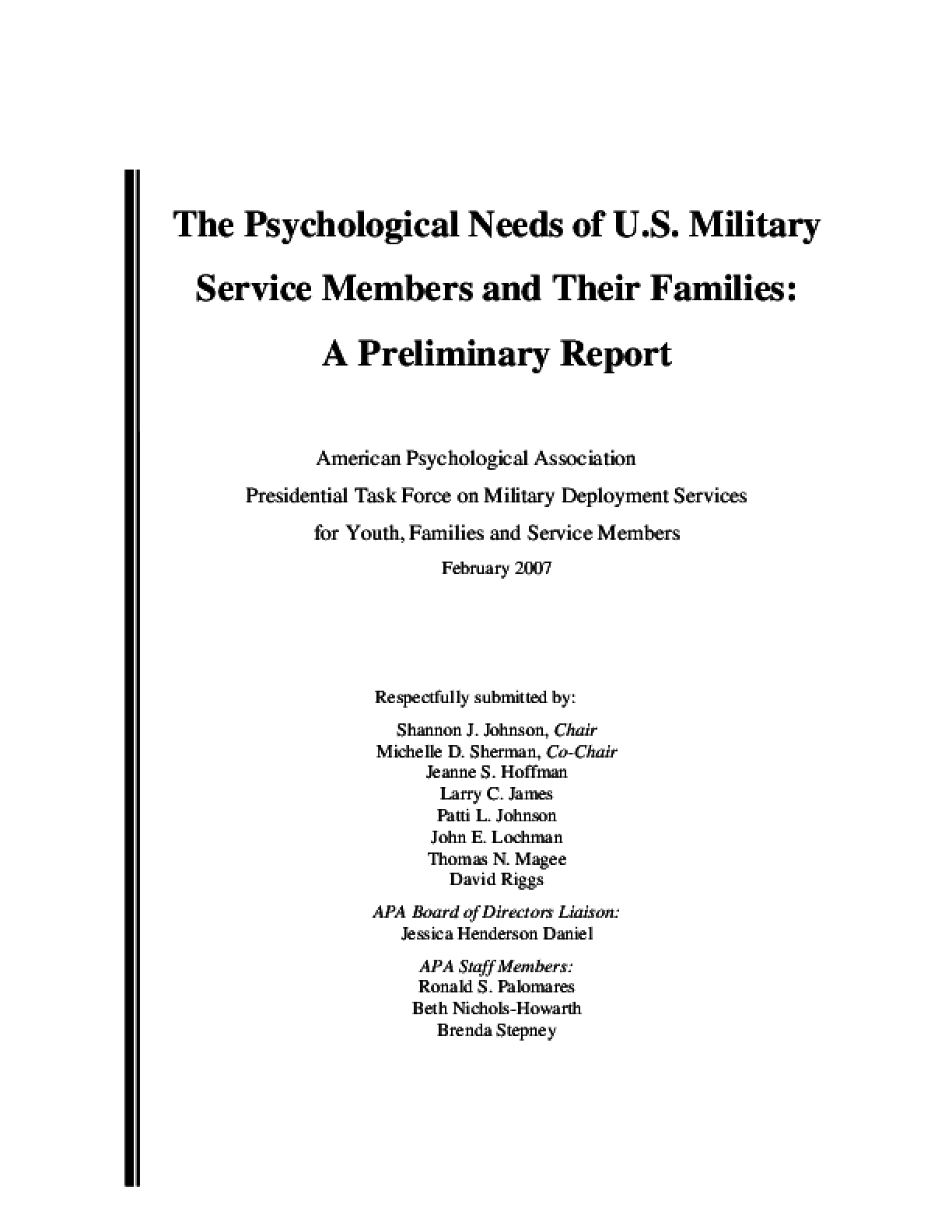